Malavya Yoga and its cancellation yoga

Malavya Yoga : It is one of the Pancha Mahapurush Yoga. When Venus is in angular houses to ascendant and is in Tauras, Libra or in Pisces sign, Malavya Yoga is created.

Cancellation of yoga's result :
As per ChandrakalaNadi or Devakeralam (Vol, II , Part I, Verse 27) , "If Jupiter is conjoined with or aspected by Saturn, Malavya Yoga generated by Venus, is cancelled and the native is troubled by the blemish. The same verse is repeated in Kerala Nadi with the addition of one more condition, "If Jupiter is conjoined with or aspected by Saturn and Venus is with Ketu, Malavya Yoga gets cancelled".
These sutras were carefully analysed, and it was noted that Jupiter is the lord of exaltation sign of Venus, while Saturn is the lord of debilitation sign of Jupiter.
.
From this evolved the hypothesis for cancellation of any Maha Purush Yoga, as under;
i) If the lord of exalted sign of a yoga producing planet is conjoined or aspected by its debilitation lord, the effect of yoga producing planet stands nullified.
OR/ AND
ii) If the yoga producing planet is conjoined by Ketu, its effects are nullified.


Mercury aspecting Venus is astronomically impossible, unless one consider aspects in divisional charts.
The above theory has been tested on a number of horoscopes. The second condition of conjunction of Ketu, though an additional confirmation of cancellation, could not be tested. I invite readers to try it also and give me a feed back.

I am posting the text Pic from Devkeralam and its commentary on it. 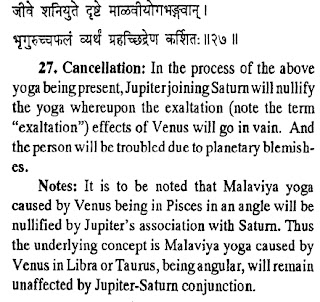 Vijay Goel said...
This comment has been removed by the author.
7:43 PM

Thankyou, I have added the picture of the Text.

Although in the original text in second line its says that exaltation status will go in vain, but we cannot conclude that this sloke is for partial cancellation.
Secondly can we say that for Venus in own sign (Libra-Tauras)can get cancelled with association with Ketu. ?

This all principles needs to be tested and verified.

Thanks for the feedback.
Regards

what if venus sits with sun in pisces in a malvya yoga???

what happens if sun sits with venus in pisces in malvya yoga?

I have venus with ketu in seventh house. Does it mean that the malavya yoga stands cancelled? Also does it bring any negative effects?

Dear sir I have Scorpio ascendant and My Saturn and Jupiter in Libra and Sun + Ven + Mer in Lagna so does it cancelled Exaltation of Saturn ?

What would be result will give Saturn on its dasha ?

Udit, it seems you completely skipped the basic conditions for a Mahapurush Yog with your comment, lol. Obviously swakshetri is also included. Only 1 Mahapurush yog is enough to raise a person to the top tier in whatever they're doing in life. Now how many Mahapurush do you really think there must be in the world? And I completely agree that it's also ruined when Ketu is with it. Thank you for this article. I've developed my know-how without reading these two books, just noting down the life and traits of people by their horoscopes. Its great to see these authorities confirm my findings.

Any reason why the sloka mentions the case of Venus alone (and not other grahas forming Pancha Mahapurusha Yoga)?