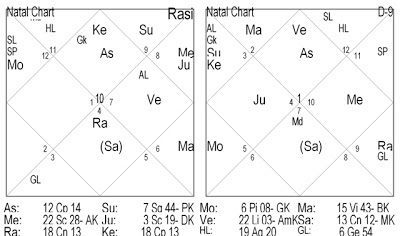 An Indian Mathematical genius, who invented more than 3900 theories and formulas, which are not only used in Mathematics but also in Polymer Chemistry, Computer Science and many other branches.

Moon Nakshatra is saturn, lagna lord is Saturn aspecting lagna, for research person requires  infinite patience and endurance, which is clearly visible.
Ketu in lagna gives the ability for focus at MICRO LEVEL, the clear cut sloka from Jaimini Rishi that ketu make clock repairer.
Mars trines to lagna and aspecting moon gives ability to think logically and to solves the problems by dividing into parts.
Jupiter - mercury yuti as well as PAC in D9 supports that person has blessings of Gurus.Lagna Nakshatra is moon , Jupiter aspecting moon and Rahu+Saturn aspecting Lagna gives intuitive powers.
Exchange of moon [4L] and mars [LL & 8L] in D24 indicate lacks in formal education but research attitude to explore.

His mother was a house wife, who also used to song at a local temple to earn little money from her side. Ramanujan had a close relationship with his mother. From her he learned about traditions & puranas.

In June, 1889 his mother gave birth to a son named Sadagopan, who died within three months.

Ramanujan plagued by health problems throughout his life. He lived in extreme poverty and was often on the brink of Starvation.

See lagnesh is retro with rahu and jupiter is afflicted by rahu. Liver is weak and much poisen in body. Jupiter aspecting moon and saturn and exalted in D9 indicating saving grace. But jupiter is also 12L, hence remedies must be continued.

2) 1903 : at the age of 16 years Ramanujan obtained a library loaned copy of a book titled "A sysnopsis of Elementary Results in Pure & Applied Mathematics", which generally acknowledged as a key Element in Awakening the "Genius" of Ramanujan.
3) 1904 : was awarded a prize for his Mathematical skills at age of 17 years.

Mercury\Mercury : Mer in 11H as 9L with jupiter, blessing of Shiva is coming.
Mercury is in 11H of awards.

4) 1905 : he ran away from home, due to his failure in getting a scholarship in Govt. College, as he failed all subjects except Maths.

5) Dec, 1906 : He left college without getting any degree and continued his research work in Mathematics and conducting tuitions to his seniors at the age of 19 years as he was experiencing extreme poverty he had to earn in someway.

Dasa Running : Mercury\Venus : Venus is in 10H in lagna and repeated in D24, amazingly correct !

Dasa is Mer\sun : sun which is making 'Saral Yoga' is also 5L in D9 gave marriage under parent's arrangement. I don't think he ever had been asked or given any opinion on it.

7) Jan, 1910 : was operated for Hydrocele Testis Surgery by a doctor without taking any fees as Ramanujan's family can not afford the fee.

8) 1st March, 1912 : was joined as Class III, Grade IV Accounting Clerk getting Rs. 30 per month. (At office he was used finish his regular work as early as possible and then start spending remaining time on his research work)

9) On 17th, March 1914 : he left from Madras to london on a ship for Research work at Cambridge. All expenses and support was given by a Prof G.H. Hardy of that university, who was impressed with genius work of Ramanujan. He arrived in London on 14th, April 1914.

Rahu aspected by 12L Jupiter in 7H with retro saturn and rahu indicate foreigners.
Rahu is in 9H in D10 indicating foreignor support.
Venus is Yog karak in D1 as well as D10.

Dasa Running : Mercury\Jupiter , i think no explanation needed it is clearly visible in 11H. :)

13) 13th March, 1919 : was returned to India, as he was living in a country far away, and overly indulged with his mathematical research work, worsened his health (which he was suffering throughout his life) by stress and by scarcity of vegetarian food during first world war.

14) 26th, April 1920 : at the age of 32 this genius mathematician left us, died due to serious health problem, perhaps due to infection of Liver.

Ketu\Ketu : afflicted by saturn and aspected by 22L in D3 and 88L in D12 with no protection was indeed a bad period. Ketu gives boils, ulcers  & infection in stomach.

A Rishi born, went to his abode in this period.

There are many more things which readers can explore themself.

Jaipur.
Posted by Vijay Goel at 9:14 AM No comments:

Email ThisBlogThis!Share to TwitterShare to FacebookShare to Pinterest
Labels: biograpies

Definition:
Outcaste persons. Who are outcasted ? Person who is un-ethical in behavior as per norms of society, whose work is not suitable under the norm of society, whose main aim is to cheat and loot others by the skills one possesses.

1) Retrograde Jupiter. Jupiter is the planet for ethical conduct, retrogression of Jupiter is worst nearly looses all ethical qualities.
2) Presence of SAKAT Yoga with no cancellation.
3) Rahu in 8H,9H or 12H OR in Scorpio, Sagittarius or Pisces sign.
4) Strong malefic influence on Lagna OR 5H primarily and
5) Strong malefic influence on Moon OR 4H from it secondary.
6) Absence of Maha Purusha Yoga.

All above condition must satisfy than person is definitely a "Chandala" nature.
Now we can re-confirm by checking more minute details by deeply looking at nakshatra and divisional chart.

These above yoga does not mean that person will be un-successful or a poverty yoga. In today's society these person has been seen to acquire lot of wealth by doing un-ethical work.

In olden days when sectoral division of caste was more profound and Dharma sastra was in the hands of few persons, at that period Rahu conjunct with Jupiter was termed as Guru-Chandala yoga, but this yoga has arrived new meanings in this modern age.

One must restrict from these types of persons, specially spiritualist.

If parents finds this yoga in their children than there is one strong remedy to perform.
----

This person is suffering from Schizophrenia for past many years and now he has started taking treatment.He is UN-married till now and uses all his skills [mainly linguistics and astrology] to lure girls and women as well as to abuse others. This is the main problem of above Jatak.

People with Chandala yoga in their horoscope show the following common psychological traits:

1. They are known for a lack of sense of gratitude which is a noticeable mark in their lives.
2. Timid and lacking in initiative they need the support of someone to climb up some ladders in their life, and after achieving some success, betray their mentors (represented by Jupiter).
3. There is no one in the world that they admire. Emotionally warped, they rarely suffer a guilty conscience.